What is the Sequel Trilogy About? Part 1: The Balance of the Force

We are two thirds of the way through the sequel trilogy yet a fairly common complaint voiced by fans is that we still don’t know what the trilogy is really about.  These fans claim that aside from the war between the Resistance and the First Order they really don’t know what the main story of the trilogy is. Let’s take a look at some hints that have been dropped at what the overarching story of the Sequel Trilogy is.

First of all, I would like to point out that Star Wars trilogies delaying the revelation of the central story is nothing new.  The Original Trilogy is ultimately about the conflict between father and son juxtaposed with their desires to have a relationship with each other. This story is hinted at in A New Hope and early on in the Empire Strikes Back which show Luke desiring to learn about his father and follow in his father’s footsteps to become a Jedi.  The true story, however, isn’t revealed until near the end of the Empire Strikes Back when Vader is revealed as Luke’s father.

The Prequel Trilogy goes even a step further. The story of the Prequel Trilogy is the fall of Anakin Skywalker, but if you had never heard about Star Wars and decided to watch the films for the first time in chronological rather than release order you would have no idea that that was the main story until well into Revenge of the Sith.  However, as with the Original Trilogy there are hints in Episode I and Episode II that that’s where the story will end up. The Jedi Council is reluctant to allow Anakin to be trained in Episode I because of the fear for his mother that they sense in him. In Episode II we see that their hesitation was well founded when Anakin slaughters the Tuskan Village after the death of his mother. 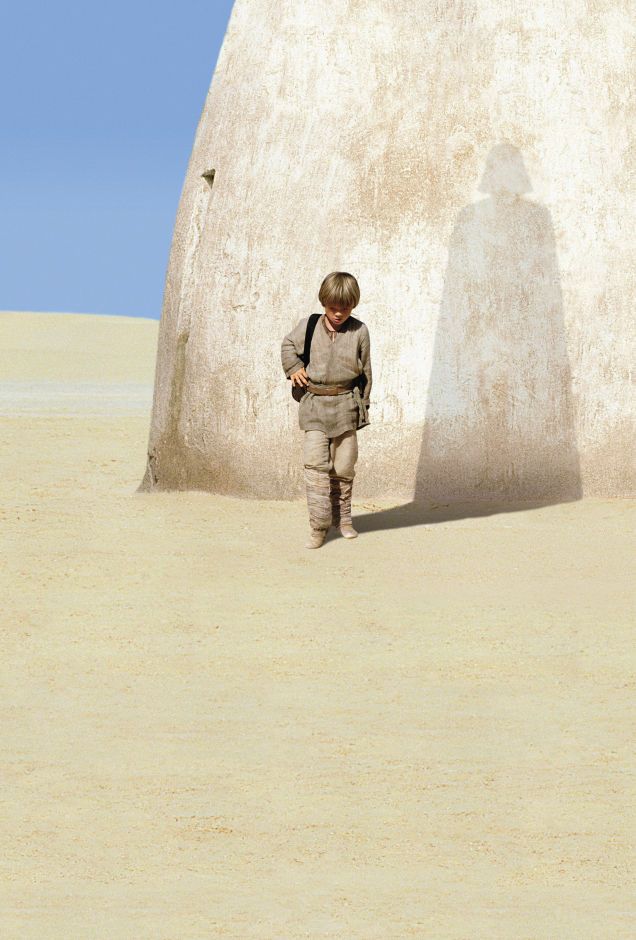 The Balance of the Force

“This will begin to make things right.  I’ve traveled too far and see too much to ignore the despair in the galaxy.  Without the Jedi there can be no balance in the Force.” – Lor San Tekka

The quote above is the opening line of the The Force Awakens and therefore the opening line of the entire Sequel Trilogy.  Opening scenes and opening lines are powerful tools for setting the tone and theme for a movie, or a series of movies, and Star Wars does them particularly well. You can tell from just the first few moments of A New Hope exactly what the film and the entire Original Trilogy is going to be about: a small but plucky group of rebels (symbolized by the blockade runner) fighting back against the overwhelming military might of the Empire (symbolized by the much larger Star Destroyer).

The Empire Strikes Back does this as well. The first thing we see is a Star Destroyer sending out probes and then one of the first things that happens to Luke is he is attacked and knocked unconscious. So we know from the beginning that the Empire is on the hunt and that our heroes are vulnerable and won’t necessarily escape unscathed.

The Phantom Menace does this a bit more subtly. While not the opening line of the film, Obi-Wan’s opening lines are revealing. “I have a bad feeling about this…It’s not about the mission, Master, it’s something elsewhere, elusive…” This sets the theme for the prequels: Palpatine’s behind the scenes manipulations leading to his rise to power, beginning with the blockade of Naboo. There’s reason to believe that as Obi-Wan’s line sets the stage for the theme of the Prequel Trilogy that the opening line of the Force Awakens sets the theme for the Sequel Trilogy.

One thing that Lor San Tekka’s line immediately does is tie back to the Prequel Trilogy by bringing up the idea of the balance of the Force.  The concept that the Force was out of balance and that that was something that needed to be corrected was first introduced in Episode I when Qui-Gon informed the Council that he believed that Anakin Skywalker was the Chosen One, the One who would bring Balance to the Force. Lor San Tekka’s line tells us that Balance has not yet been achieved.  Bringing balance to the Force, then is likely central to the story of the Sequel Trilogy and will be a thread that is used to tie all nine films together.

Further evidence that this trilogy is about bringing balance to the Force could be found in the novel Legends of Luke Skywalker. The sixth story in the novel, Big Inside, introduces the concept of “the Rot in the Mist”.  The “Mist” being an ancient term for the Force. The ancient Force wielders of the story believe that Luke is trying to somehow fix the “Mist”. This mention becomes even more interesting when paired with the fourth story, I, Droid. A case can be made that I, Droid is an allegory for the saga as a whole. Zeta, the central droid character of the story is a  stand-in for Anakin. Zeta is heroic and enjoys carving just as Anakin is shown to be heroic prior to his fall and once carved a pendant for Padme. Zeta is made an enforcer for the slavers tasked with putting down rebellions, just as Anakin became an enforcer for the Emperor and was tasked with putting down the Rebellion.  Zeta fights Luke causing his hand to be damaged and the mechanical hand to be revealed just as Vader fought Luke and cut off his hand. Luke cuts off Zeta’s hand just like he cut off Vader’s. Luke realizes there is good in Zeta when she stops herself from trying to kill him just as Luke sensed there was good in Vader because he couldn’t bring himself to kill his son. Luke is able to “redeem” Zeta just like he was able to redeem his father. Luke removing the parity gate to redeem Zeta is analogous to Luke reaching the good in his father. Luke disabling the parity gates of the other enforce droids on a mass scale is suggestive when paired with the “rot in the mist” from story six (as well as the nightmares the Acolytes of the Beyond had in Aftermath). Perhaps bringing balance to the Force, healing the “rot in the Mist”, will have a similar effect on Force Users that switching the parity gates had on the droids.  The pull to the dark side and the power it has over others will be no more.

So what could bringing balance to the Force look like?

We know from the Aftermath novels that at some point prior to becoming Emperor, Palpatine began to sense a “signal” coming from the Unknown Regions.  He constructed the Jakku Observatory as a means of finding safe passage out to the source of that “signal”. We also learned in the Aftermath books that Palpatine had orchestrated a Contingency plan should he ever be defeated.  Part of that contingency plan was an Observatory on Jakku that was designed to plot a course into the Unknown Regions, presumably toward the “signal”. We theorize that this “signal” is the “rot in the Mist” described in the Legends of Luke Skywalker, a place where the Force itself has been corrupted.

Of course, if the finale of the Skywalker Saga is ultimately about bringing balance to the Force then the climax will center around restoring this place of corruption to its previous uncorrupted state.  That would mean that the final showdown of the climax would ultimately be the heroes against something amorphous and impersonal. That could make for an interesting ending, but given that the external conflicts throughout the series have largely been deeply personal defeating something that by its very nature has no personification would seem an odd note to end on.

This is where Palpatine come in.  Force Ghosts are said to be one with the Force.  It would make sense then that in death the greatest villain of the Saga would become one with the Dark Side.  This would grant the previously amorphous “rot” a personification and make it into a villain that every hero in the Saga can have some personal connection to. Palpatine is the Dark Side and the Dark Side is Palpatine.  Defeat him and you cleanse the “rot”. Defeat him and the Balance of the Force will be restored. But be cautious, the always seductive Dark Side now has the sentience of the master manipulator behind it and he is now “more powerful than you can possibly imagine.” 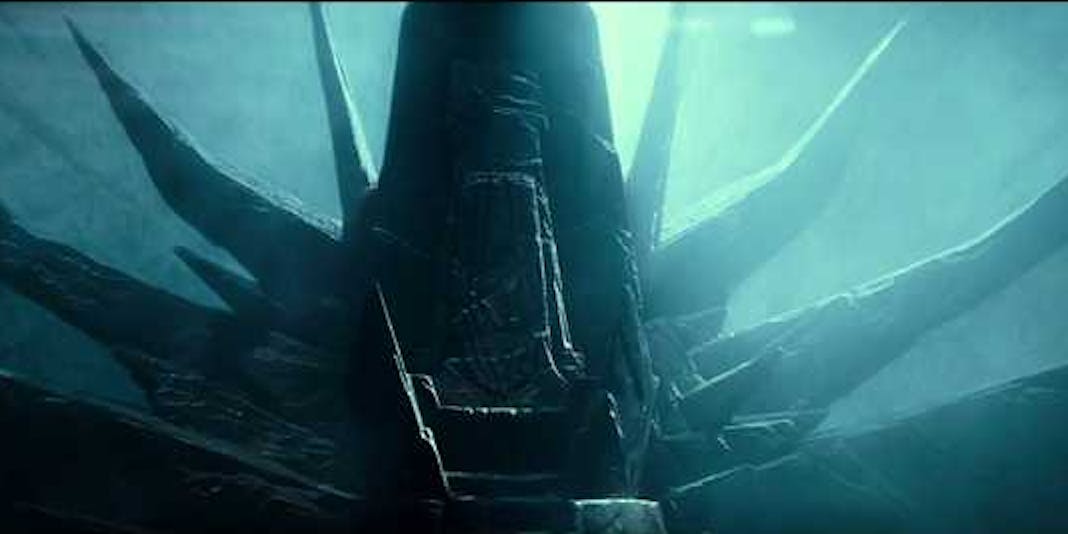