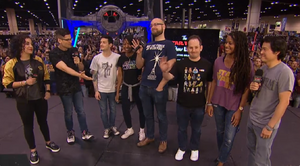 Compiled by robotical712 with help from conn8d

Fans have debated how much of a plan Lucasfilm has since Canon began. Based on statements from Rian Johnson and a couple of others, many fans have concluded LFL doesn’t have any kind of long term roadmap or plan. In the first part we present the various comments from those involved in the story creation process indicating there is in fact a plan.

While the term “Story Group” may make it sound like they are dictating the story, that’s not usually the case. In most cases, authors or filmmakers who are hired to work on Star Wars properties, are given the opportunity to come up with their own stories and ideas. While doing that, they work closely with the Story Group to make sure the stories are authentically Star Wars (for example, Darth Vader doesn’t dance or something) and also fit into the larger plan. Hidalgo said they’ve heard pitches from people who have great ideas for characters who are then told, “Come back in six years.” That’s because the story they’re pitching would fit in better with a character at another point in the future.

JJ: The script for VIII is written. I’m sure rewrites are going to be endless, like they always are. But what Larry and I did was set up certain key relationships, certain key questions, conflicts. And we knew where certain things were going. We had meetings with Rian and Ram Bergman, the producer of VIII. They were watching dailies when we were shooting our movie. We wanted them to be part of the process, to make the transition to their film as seamless as possible. I showed Rian an early cut of the movie, because I knew he was doing his rewrite and prepping. And as executive producer of VIII, I need that movie to be really good. Withholding serves no one and certainly not the fans. So we’ve been as transparent as possible.

Rian has asked for a couple of things here and there that he needs for his story. He is an incredibly accomplished filmmaker and an incredibly strong writer. So the story he told took what we were doing and went in the direction that he felt was best but that is very much in line with what we were thinking as well. But you’re right—that will be his movie; he’s going to do it in the way he sees fit. He’s neither asking for nor does he need me to oversee the process.

“We haven’t mapped out every single detail yet. But obviously everybody’s talking to one other and working together […] that collaboration is going to guarantee that everybody’s got a say in how we move forward with this.”

“[Lucasfilm Story Group head] Kiri [Hart] has been very good about creating a narrative timeline, and having everybody involved in a certain narrative understand where it might fit. That’s become important to the way we talk about these stories.”

Peter: Yeah, like was George’s story more focused on the original trilogy characters?

Kathleen Kennedy: No, because the legacy characters play a significant role in this, and I would say and inside the balance that George was talking about to begin with. It was really much more to do with the specifics of the history of the saga. We changed the order of a few things, let’s put it that way. We didn’t make some wholesale change.

“No [J. J. Abrams didn’t do a treatment for future Star Wars episodes], because at that point we were sitting down and talking about where this might go, even as early on as with Michael Arndt. We were sort of plotting out, because obviously if you know up front that you’re building the pacing inside a trilogy structure, we needed to have some sense of where this saga was going without locking in on things and leaving room for creative development. But we had to have some sense of where we were going.”

“[Wait… but it was already confirmed (I think by JJ in a magazine interview) to be 32 years after the Battle of Endor, not 30?] It wiggled for a while, but we landed on 30 after VI in order to fit everything we got in between.”

“Larry and I had a bunch of thoughts of where certain things could go and we shared those things with Rian Johnson, who’s directing VIII. He had things that he came up with where he asked if it was possible if we could make some adjustments with what we were doing at the end, most of which we did — there were just a couple that didn’t feel right, so he made adjustments — but it was just collaboration. We’re all fans and friends and supporters of each other, and there’s been no one cheerleading and supporting louder and more consistently than Rian on this, and I feel that I am grateful that I now get to take that position for him.”

“We’ve thought this all through. The story group has put together a very carefully thought-through strategic plan for how we’re developing the stories and what those stories are and targeting filmmakers. We’ve looked at it up through, I would say, 2019, Episode IX.”

Star Wars Bookworms Podcast: (21:38) “A lot of that stuff [such as Han Solo the racing pilot] came out of… as Episode VII really… as The Force Awakens really took shape and we understood where these characters were gonna be – at a story retreat outside the Lucasfilm Story Group. We figured out, okay, we now know what the endpoint is for VII, and we know where we left off in VI, so let’s start mapping the trajectory of these characters’ lives in broad strokes so we understand where they’ve been and what they’ve been up to. And that development of Han in answering the question, “what does a retired peacetime Han look like?” knowing that he’s gonna end up back in the scoundrel form that we know and recognize from the original trilogy – but it’s like, it’s not like he’s been doing that for 30 years. So what does peacetime Han look like? What would he get into? We kind of came to this idea and it’s an idea that’s gonna surface in other storytelling that takes place in between VI and VII. Stuff like that we’ll be able to mine more fully than just a throwaway line in the Visual Dictionary.”

“[Rey’s] past is not flexible. I know what the past is, and that’s not changed. It’s always been the same.” “But the future? Now I’m doing VIII, I’m also thinking about IX. So I’ve been asking Rian, thinking that he’ll know some stuff, and he refuses to tell me. So I think it’s good to just concentrate on one thing at a time.”

“So with the Story Group overseeing all of the content in film and television and elsewhere, we don’t have to retroactively make those changes. We can anticipate those changes. We can seed things in one medium [and see them grow] in another. So we might be seeding things in books or TV that you might not realize is substantial until years down the road. And if people knew what the roadmap looked like, they would just be floored.” 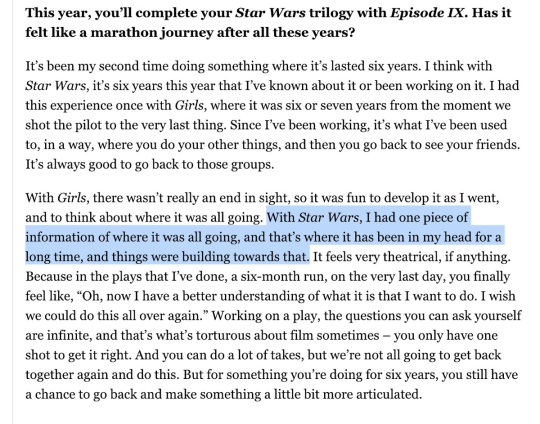 In part 2 I will use these quotes in conjunction with how Canon has evolved to layout how the Lucasfilm creative process works.