Review and Analysis of Last Shot 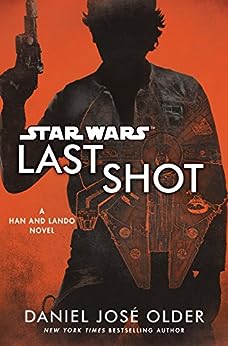 First, sorry about the low frequency of posts. I just started a new job and am still trying to get into a rhythm. Anyway, Last Shot came out almost three weeks ago and I finally finished it last weekend and I put together a combined review and analysis. The first section does not contain spoilers and functions more as a review.

Last Shot is a Solo tie in and, as one might expect, focused on Han and Lando. The story is set two years after the Battle of Jakku (7 ABY), but interweaves the main story with Han and Lando’s respective past encounters with the big bad of the story. In terms of the wider narrative, the story is fairly self-contained with minimal consequences outside the events described in the pages with one exception.

Personally, I enjoyed the book, although it’s not my favorite Canon book. Han and Lando were written well and you can definitely see the ties to the upcoming Solo film. However, I also feel the book is more of an epilogue than prologue to Solo and may have benefited from being released concurrent with or after the movie. Lando’s story in particular suffered a bit from the lack of characterization he’s had in Canon.

The antagonist, Fyzen Gor, was actually quite interesting and reading how he became the way he is was riveting, though he could have used more interaction with the heroes. I do feel the threat he represented was out-sized for the scope of the story though. The supporting cast was fun, if gimmicky. Overall, the book was fun, but it might be better to wait until after the movie if you have other Canon books to conquer.

Last Shot falls in the ST era, but isn’t really part of the ST narrative per se. It functions to bridge the characters as we see them in Solo and as they are after the OT. While Ben and Leia are in the book and a significant background presence and Han angsts a bit over being a husband and especially a father, it’s focused on merging and reconciling the pre-OT and OT versions of Han and Lando. This is especially blatant for Lando’s story-line – to the point the book spells it out:

The answer, as Lando later admits to himself, is both, but when the chips are down he will do the right thing. At the end, Lando willingly attempts to destroy the Phylanx Redux Transmitter even it likely means his death.

Han makes a similar realization about himself. Being a father and husband isn’t something that comes easily to him and he thrives being in the thick of the action, yet feels incredibly guilty about it:

The words felt like a healing balm over his tired body, but one he couldn’t fully allow himself to accept. “That’s just it,” Han said. “It feels right being out here, but it feels wrong that it feels right. And then I…” He waved his hand uselessly. “Then I just want, no, I need to be back with you and Ben. And then I am and I feel like nothing I do is right and all I want is to be out where I know how to do things.”

Leia ends up telling him that’s to be expected and she understands that he does need time to ‘save the galaxy’ from time to time and sometimes she’ll be there right along with him.

While the book is highly self-contained overall, it does cover one major development in the overall narrative in regards to Lando. Near the start of the book we’re introduced to a Twi’lek woman named Kaasha Bateen. It turns out she and Lando have a history and fought along side each other (in the only referenced as yet unseen event that can’t be attributed to Solo). Heretofore, Lando has never been one to get emotionally attached to any one person, but Kaasha is somehow different and that forms the basis of his internal conflict for most of the book. By the end, Lando has reconciled his emotions and realizes he needs to accept what they’re telling him. The book ends with Lando settling into a long term relationship for the first time.

“Yep,” Lando said. “Seems like the New Republic cruisers are blockading whoever all these other guys are. Problem is…”
“No guns,” Han finished for him.
“Not many guns,” Lando amended.
Han sighed. “Thank you, Mon Mothma.”
“Although the pirates may not know just how much the odds are in their favor at this point. Demilitarization wasn’t perceived to be as widespread as it actually was, from what I’ve heard.”

The Republic has trouble attaining local military superiority against pirates. Even without the First Order putting their thumb on the scales, the chaotic dissolution of the previous government would be very messy and the galaxy isn’t lacking for weapons.

A uniformed Gungan awaited them behind a desk at the main entrance to Administrative Sector 44-B of Substation Grimdock. The nameplate on the desk said ARO N’COOKAALA. He was reading a thick datapad and appeared completely uninterested in the world around him.

“Oh, these guys,” Han said under his breath to Chewie and Peekpa. “I’ll handle this.” He stepped up to the desk and waved, flashing a goofy smile. “Greetings! Meesa—”

Aro held up a hand. “Let me just stop you right there, buddy.”