Prequel Trilogy- The Fall of Man

Wherefore, as by one man sin entered into the world, and death by sin; and so death passed upon all men, for that all have sinned: Romans 5:12

The story of Anakin in the Prequel Trilogy is of a man who surrendered to temptation and through his fall plunged the galaxy into darkness.  In the Bible, Adam and Eve were originally created perfect, sinless, and immortal. Anakin parallels this by first appearing in the trilogy as an innocent child and then is later portrayed as a heroic Jedi.  Adam and Eve were placed in the Garden of Eden and were commanded by God not to eat from the Tree of the Knowledge of Good and Evil. Anakin was trained as a Jedi and commanded to avoid the Dark Side at all costs. The Devil as the Serpent tempted Eve to eat from the tree and she succumbed to the temptation. She gave the fruit to Adam and he ate it as well.  Anakin is symbolic of Adam. Palpatine, of course, represents the Serpent who uses his subtlety to get Anakin to partake of the forbidden fruit that is the Dark Side. The parallels aren’t exact because in the Bible the Serpent tempted Eve not Adam. In a way the parallel still works though, as I’ve heard pastors teach that Adam’s motivation for willingly eating the forbidden fruit was that he thought Eve was going to die a physical death immediately after eating it and didn’t want to live without his wife.  Anakin parallels this by giving in to Palpatine’s temptations because he felt he couldn’t live without his wife. As a result of their sin, Adam and Eve were expelled from the Garden of Eden and they and their descendants were now mortal. They and all of humanity after them also now had a sin nature, so that no one can help but do wrong from time to time. Just as Adam’s fall brought the curses of death and sin on the world, Anakin’s fall led directly to the rise of the Empire where evil reigned over the galaxy.   In a broader sense, Anakin represents all of sinful mankind. Just as the Bible says that sinners are condemned to hell, Anakin is punished for his crimes with immolation on Mustafar. 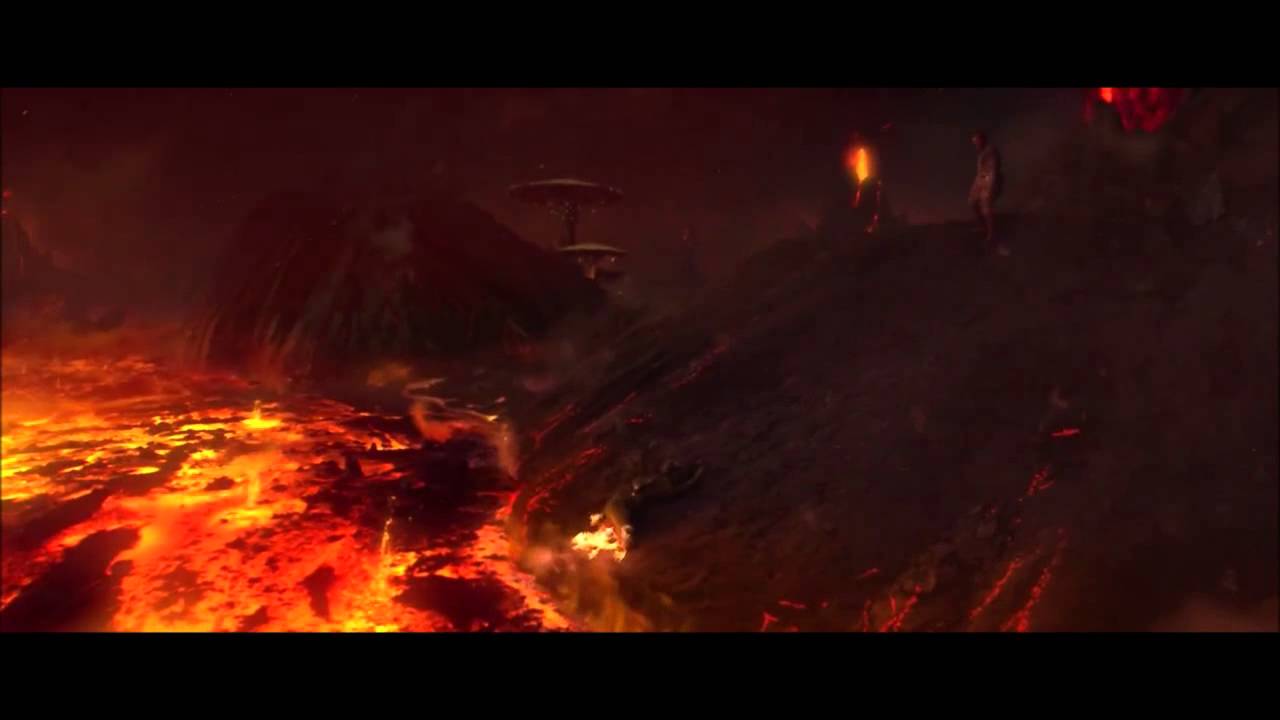 Repent ye therefore, and be converted, that your sins may be blotted out, when the times of refreshing shall come from the presence of the Lord; Acts 3:19

Luke in Return of the Jedi parallels the crucifixion of Christ. Jesus refers to himself in the gospels as both the Son of God and the Son of Man, reflecting his dual nature as both God and human.  Luke is the son of Anakin but also a direct descendant of the Force itself. Jesus was willing to sacrifice himself to save mankind from their sins. Luke was willing to die if it meant bringing his father Anakin back from the Dark Side. Jesus allowed himself to be captured by the band sent by the Jewish leaders without a fight.  Luke willingly surrendered to the Imperial forces on Endor. Jesus was tried by the Jewish religious leaders and Pontius Pilate. Luke was taken before Palpatine. Pilate condemned Jesus to death despite finding no fault in him. Palpatine condemned Luke to death when he refused to turn to the Dark Side. Luke’s death and resurrection in Return of the Jedi are symbolic as Anakin was able to prevent Palpatine from truely killing Luke, but it was still Luke’s willing sacrifice that brought Vader to a place of repentance. Vader only achieves redemption through Luke’s “death” when he repents of all of the evil that he had done and accepts the forgiveness offered by Luke. This parallels the teachings of the Bible that salvation is only gained through repenting of one’s sins and accepting that they were paid for by the death, burial, and resurrection of Christ. This, I think, is the symbolism that people who ask how Anakin could truly be redeemed are missing. His redemption didn’t come from his good works outweighing the bad but through his repentance.

For by grace are ye saved through faith; and that not of yourselves it is the gift of God: not of works, lest any man should boast. Ephesians 2:8-9

Rian Johnson takes the symbolism of symbolism of Luke being a type of Christ that was begun in Return of the Jedi to another level in The Last Jedi.  When Jesus was alive, Israel was under Roman occupation and the Jewish people were looking for a Messiah who would bring them freedom from Rome and reign over them as King. The Jewish religious leaders rejected Jesus because he didn’t meet their expectations of what the Messiah would be. At the beginning of the Last Jedi, the Resistance is in dire straights and is hoping that Luke will return as a legendary hero and help them defeat the First Order and restore peace and freedom to the galaxy.  When Rey first meets Luke she is expecting to meet a legendary hero not a “man of sorrows and acquainted with grief” (as Jesus is described in Isaiah 53:3). This symbolism works incredibly well on a meta level as well. The fans were expecting Luke to perform spectacular displays of power that would leave his enemies dead or running scared. They weren’t expecting a broken man who had embraced a life of pacifism. Luke mentions to Rey that in his attempt to rebuild the Jedi Order he had taken his nephew Ben and a dozen students.  A dozen is literally 12 but is often used colloquially to refer to groups of approximately 12. Regardless of whether Ben was the 13th student or truely was the 12th student the number the script wants you to pay attention to is 12. Luke had 12 students just as Jesus had 12 disciples and in both cases one was a traitor. Snoke turned Ben’s heart against Luke just as Satan turned the heart of Judas Iscariot against Jesus Christ.

During the Battle of Crait the Resistance is in a hopeless situation.  No matter how hard they fight they are never going to be able to defeat or escape from the forces of the First Order on their own.  They need a savior. Rian Johnson has said that it was very important to him that Luke’s death be on his own terms. He couldn’t just die a valiant death in the battle against evil, he had to lay down his life willingly.  Luke knew that projecting himself to Crait would result in his death, but he went willingly so that he could save the people he loved from the First Order. Jesus knew that he would be crucified if he went up to Jerusalem, but he went willingly knowing that his death burial and resurrection would save many from their sins.  When Luke went out to face the First Order alone, the Resistance was given a choice. They could go out and fight alongside him, in which case they would have surely been killed and Luke’s sacrifice would have been in vain, or they could take a leap of faith. They chose to put their trust in Luke, that he was “doing this for a reason,” and thus they were able to escape the clutches of evil. This parallels the teaching of the Bible that no one can be saved through their own efforts but only through faith in Christ.

Given the symbolism that Rian Johnson appears to be deliberately invoking with Luke’s death in the Last Jedi it seems almost a foregone conclusion to me that Luke will have some sort or resurrection in Episode IX. Given how on the nose Rian Johnson was with giving Luke 12 students, I would not be the least bit surprised if Luke’s return is exactly 3 days after the Battle of Crait (to parallel Christ rising again on the third day). I expect Luke to return as far more than just a Force ghost, I expect a physical return.  Though, like Jesus is described after his resurrection, Luke’s body might be a bit more than that of a mere mortal. This means we could likely also see Luke to show some powers we haven’t seen him use before.

The Sequel Trilogy also appears to have symbolism for the second coming of Christ surrounding Luke. Very shortly after the end of Return of the Jedi Luke disappears and by the time The Force Awakens takes place no one knows where he is. This parallels the ascension of Christ. In his absence some doubt he will ever return, some doubt if he ever existed at all, but the faithful (Leia and the Resistance) still cling to the hope that he will come back one day soon.

The Bible prophesies a great period of tribulation just prior to the Christ’s second coming.  In the Sequel Trilogy this is represented by the war with the First Order. Halfway through that time period the Anti-Christ enters the Temple at Jerusalem and proclaims himself to be God.  Almost exactly halfway through the sequel trilogy Kylo declares himself to be the Supreme Leader. The Bible tells the Jews that when they see the Anti-Christ revealed run.   The Bible specifically mentions that Christ himself is the one that makes the way for the inhabitants of Jerusalem to escape by causing the mount of Olives to cleave in two (the above passage).  When the Resistance flees from the First Order, Luke (and Rey) provide them a way of escape through a cleft in the mountainside.

The Bible prophesies that the remnant of Israel then flees into the wilderness and is pursued by the armies of the Anti-Christ.  At the end of The Last Jedi the remnant of the Resistance is shown fleeing to the Outer Rim.  No doubt the First Order will soon catch up with them. The Bible prophesies that the remnant of Israel will get cornered in the Valley of Meggido (which in Greek is Armageddon).  That’s when Christ has his second coming where he defeats the armies of the Anti-Christ and saves the Jewish people. Star Wars like to have climaxes where there are multiple battles taking place.  Typically one of the battles is of a very personal nature while the other(s) are on an epic scale. In Episode IX, Rey will likely take part in the more personal battle as she confronts Kylo Ren. If the symbolism holds, I expect that the large scale battle will turn against the Resistance.  Just when things look most dire, Luke will arrive to save the day. During Christ’s second coming the armies of heaven follow him. Luke might arrive with allies as well, possibly the new Jedi that Snoke was so afraid would rise if Luke ever returned.