The revival of Maul for the The Clone Wars TV series has given us an interesting look at a character that never fell, but was raised with the dark side. At its heart, Maul is a cautionary tale about the futility of revenge.

Born to Mother Talzin of Dathomir, Maul was abducted by Darth Sidious at age six to be his Sith apprentice. Deprived of any personal connection, Sidious saw to it that his new apprentice was driven purely be hatred for the Jedi. Sidious exposed him to the the battlefield of Malachor, once a battleground between the Sith and Jedi, creating a void that could never be filled. Even after killing his first Jedi, a padawan, Maul found his hunger just grew.

Indeed, even after being bisected by Kenobi on Naboo, the desire for vengeance was the only thing sustaining him. Yet he still formed a bond of sorts with his brother, Savage Oppress, and his mother, Talzin, even as he allied with them in the name of vengeance against Sidious. Alas, both were killed and the thirst for revenge was all he had left once again.

Turning his attention to the Sith, Maul sought out a means to destroy them, leading him to the ancient Sith super-weapon on Malachor. Unfortunately for Maul, Darth Vader and the Lothal Spectres intervened before he could make use of it and he was forced to flee. After failing to make use of the super-weapon on Malachor to destroy the Sith, Maul was left without purpose. Seeking out and manipulating Ezra Bridger, he combined a Sith and Jedi holochron with the goal of finding something to give him hope, but learned Obi-Wan Kenobi was still alive instead. Once again taking up the cause of vengeance, Maul left to find him. Eventually finding Obi-Wan watching over Luke in the sands of Tatooine, Maul confronted him and his inability to move on from the past finally caught up to him. Obi-Wan quickly cut down Maul after 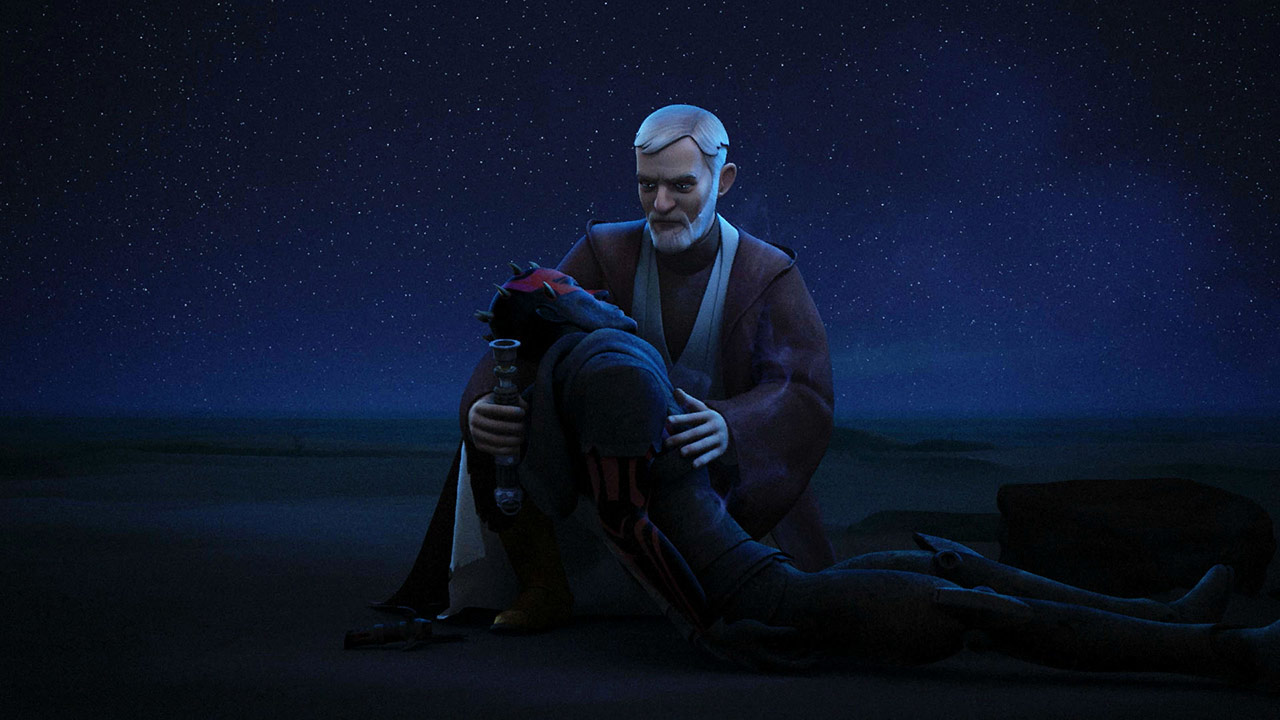 the latter tried to use the same technique he had used to kill Qui-Gon Jinn decades before on Naboo. Having lost everything and unable to find anything else to live for, his thirst for revenge finally cost him his own life and he died broken and alone save for the compassion of a man he considered his enemy.

Maul demonstrates the dark side cannot give, only take; the more you give it, the more it wants. Much like Vader and Kylo Ren after him, every attempt to fill the void with blood just resulted in it growing bigger until it finally consumed him in the sands of Tatooine. Interestingly, he still had strong loyalty to his mother and brother (and they to him), even pleading with his mother to use him to become stronger as she faced Sidious. Rather than outright consuming him like it did those before and after him, the dark side seems to have just broken him, perhaps because he was never given a choice.