In the first Rebels episode of the second season, Minister Tua tells the Spectres there’s another reason the Empire had taken such a strong interest in Lothal besides it’s mineral resources. Unfortunately, she’s killed while defecting and they and we don’t learn what that reason was. However, as we enter the final stretch of the show, hints about what the Emperor really wants there are building. In this post I’ll explore some of the hints and how they might connect to the bigger picture being built across the franchise. Highly speculative.

The revelation that Rebels will connect to the (in)famous Mortis arc from The Clone Wars has caused quite a stir among fans. Ever since the arc first aired, fans have hotly debated what the arc actually means, whether Mortis is a real place and even if any of the events actually happened. The wide consensus, backed by creator commentary, is the Mortis arc is largely metaphorical and the events meant as an allegory for Anakin. However, it now appears Mortis is a bit more than just a Force vision.

The first indication Rebels would be tying into Mortis was the appearance of a convor with the same coloration as the Daughter in the 20th episode of Season 2, The Mystery of Chopper Base and again in the season finale, Twilight of the Apprentice. At this time, the connection to the daughter is a bit unclear since the daughter was apparently killed in the course of the Mortis arc. However, the convor appeared once again in the preview for the second half of Season 4, this time on the shoulder of the Daughter on an activated mural depicting the Ones:

This suggests the bird is or was some kind of familiar or even avatar for the Daughter. Interestingly, Ahsoka is present for both times the Convor appears. If you recall, the Daughter revived Ahsoka with some of her life energy after the former was mortally wounded and the latter was killed by the Son. It seems likely the convor is tied to Ahsoka in some way because of that. More on that in a bit.

Also of interest on the mural is the large central rock and four smaller surrounding rocks. The rocks, of course, correspond to the Jedi Temple visited in the first and second seasons: 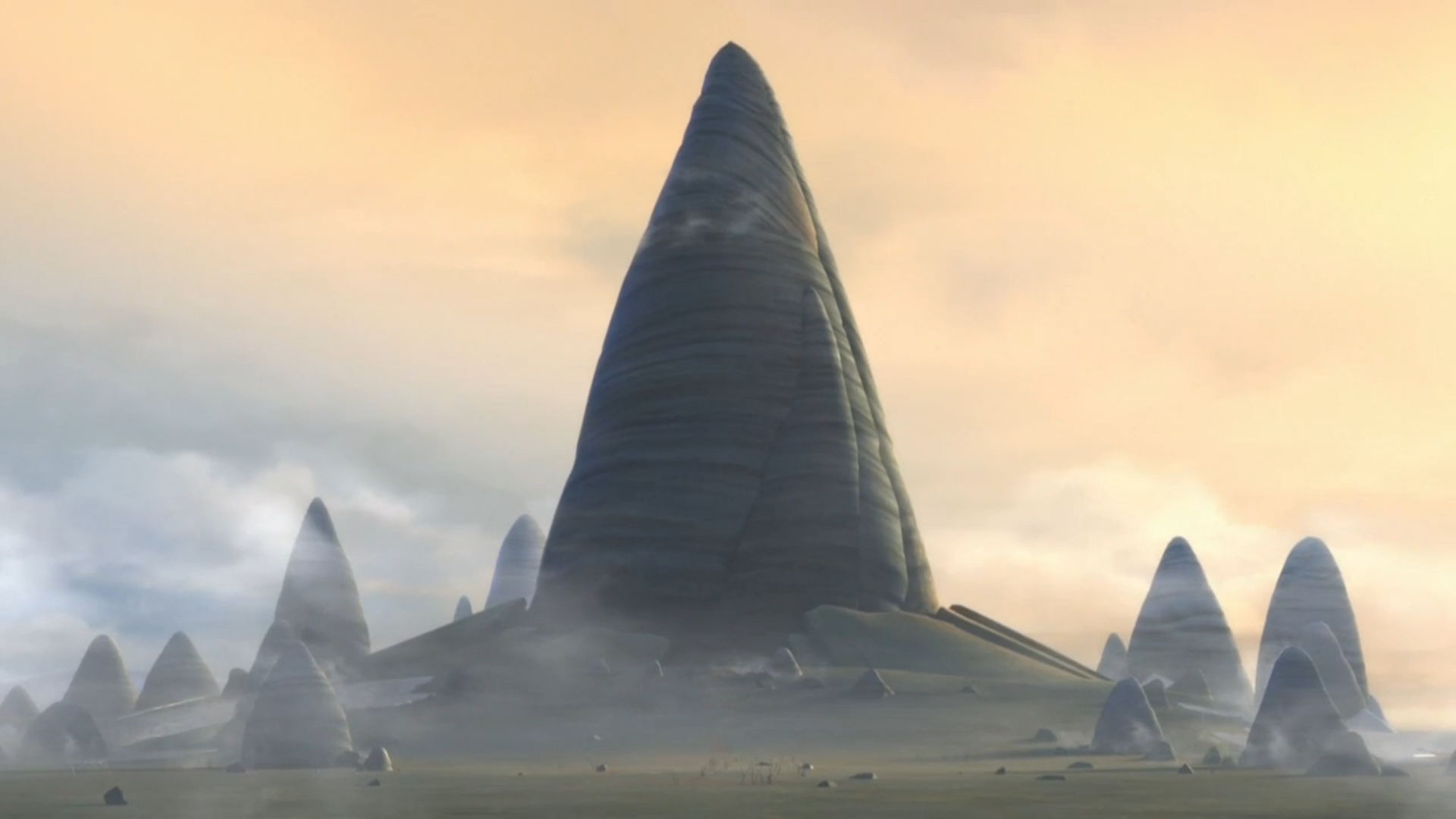 The Empire seized the temple in the second season, but the above mural combined with the cave painting suggest the shrine’s significance extends well beyond being just a Jedi temple. The question is, what is that significance?

It may not seem like Luke’s compass, first shown when he acquires it from the Pillio Observatory in Battlefront II, would tie into Rebels. As it happens, although designed for The Last Jedi, the compass was created by Rebel’s creator David Filoni. As such, it is visually quite striking, especially when you compare

it to a galactic map:

While the compass doesn’t precisely align with any arrangement on the above map from The Last Jedi Visual Dictionary, the holes likely do correspond to star systems. As a Jedi artifact, it’s not too much of as stretch to think the compass is tied to the Force in some way. In fact, the stone may actually be a special type of Kyber crystal or a related mineral. The ‘holes’ in the compass may represent locations where the Force is particularly strong – vergences. The compass, therefore, may use strong Force presences to orient itself.

Mortis has been an enigma and obsession for the fan community since its debut in The Clone Wars. Fans have debated whether it’s a literal place or just the result of a shared Force vision. I would postulate that it’s actually both – it’s how the Force itself might be perceived if one were to physically enter it while still alive. It doesn’t have a physical location per se, as it’s a representation of the Force itself.

Therefore, Anakin, Ahsoka and Obi-Wan’s experiences can be said to have happened, but within the Force itself (note time is also meaningless). Normally, physically entering the Force while alive is impossible, with the possible exception of one descended directly from it (ie: Anakin). However, there may be locations that are so strongly connected to the Force which allow one to enter and leave it while living. Further, the ‘spokes’ on the compass could represent such locations and Lothal may be one of them.

Rebels has already introduced us to the idea that physical distances on Lothal can be quickly traversed via the Force. It’s unknown how unique Lothal is in this respect, but Palpatine’s direct interest in the world suggests it is. It may be that these ‘paths’ are a manifestation of the strong connection the world has to the Force and the mural above is where the connection is at its strongest and directly entering it may be possible.

If this speculation is correct, then the cave painting may suggest how Rebels might end:

The Empire has begun systematically destroying Lothal, stripping it of its materials. It’s possible this destruction is a deliberate attempt to corrupt the vergance, much as Jedha’s will be corrupted by the Death Star or Jakku’s will be by artifacts. The Empire is far too powerful to stop directly, but the mural suggests another way.

The Jedi temple is likely at the epicenter of the vergance and contains the mural above. Ezra, driven by his love for his world, may activate the portal and call the people and animals of the world to the temple and lead them into the Force itself. By remaining with his people, Ezra could seal the portal from the other side, saving the people and wildlife of Lothal and prevent the Emperor from both corrupting the vergance and gaining physical entry to the Force itself.