The Fall of Ben Solo

I would like to say up front that I don’t think JJ’s statement in the commentary that Rey and Kylo haven’t met before TFA should be taken absolutely. So please don’t reply as though I’m not aware of what he said. Second, it does make some leaps that aren’t predicated on any information we currently have. It’s based on where I think the ST is going thematically. This incorporates ideas developed in the previous three sections.

We have been given very little about Ben’s fall to the dark side. Based on the conversation between Han and Leia in TFA, it’s very likely the two knew Snoke personally. Leia’s statement that Snoke had been influencing Ben ‘from the beginning’ suggests the relationship started close to Ben’s birth. She further states Snoke knew he would be strong in the Force early on. For Snoke to target Ben so early, he must have somehow known Luke, Leia and Ben were the descendants of Anakin/Vader. This presents a problem, as the only people outside Luke, Leia, Han and Chewie to know of the Skywalker heritage were dead and we know the secret was kept until the events of Bloodline. We know Kenobi, Yoda and Bail never told anyone, which leaves the Emperor and Vader. Therefore, the probable way Snoke learned of the Skywalker heritage is through the Emperor.
I posit above that Snoke was a secret apprentice and agent of the Emperor (1). As an apprentice and confidant, he would have been in a position to know the Emperor’s plans regarding the Force in general and the Skywalkers in particular. From there, it’s simply a matter of learning Leia was Luke’s sister to know Ben was Vader’s grandson. He is also the person the Emperor secretly selected as his successor in the event of his death.

In all likelihood, he infiltrated the Republic as a move to plant the seeds for the First Order within the nascent Republic and sabotage Luke, but once he learned Ben was Vader’s grandson, he likely refocused on Leia and her son. As the Emperor’s apprentice, Snoke would have known why the Chosen One and his bloodline were so important and it would prove invaluable if he could corrupt and recruit a descendant. As a child, Ben would have been especially susceptible to Snoke’s influence.

Snoke’s first goal would have been to emotionally isolate Ben while posing as his friend and mentor. Ben would have already been especially vulnerable due to his extreme Force Sensitivity. While secretly encouraging Ben’s exploration of his powers, Snoke would need to see to it that there was no one to give him the guidance he desperately needed. With Luke rarely around (and Snoke probably did what he could to keep him busy), the only other person who could give Ben real guidance was Leia. By subtly undermining Leia’s trust in herself and the Force, Snoke managed to make Leia forsake and even fear that part of her (2).

His own mother’s fear and abandonment of the amazing power they both shared must have caused considerable confusion and distress for the young Ben. So, Ben befriended the only person who seemed to understand and encourage his gift. Snoke took full advantage of this and began to suggest that not only was Ben different, but superior. Ben’s father’s lack of sensitivity made him inferior and someone to be scorned. His mother had the gift, but was too emotionally weak to embrace it as she should.

At the same time as isolating him, Snoke would ensure he Ben had a front row seat to the chaos following the fall of the Empire. Even under the best of leadership, the New Republic would have struggled to fill the vacuum left by the defunct Empire and lawlessness would have been rampant. Indeed, much of Ben’s early life likely involved his parents running to extinguish one fire after another. All Snoke had to do was cultivate Ben’s resentment towards his family and his indignation at the ‘ineffective’ New Republic government. It would also take little effort to suggest Ben and his family not only had a right to rule, but a duty to. The fact his family was squandering its power and right to bring order would just breed further resentment.

Ben’s attitude and resultant behavior would have become more and more distressing to Leia who sensed something was wrong, but didn’t know what. She further worsened the situation by attempting to resolve it by herself, playing right into Snoke’s hands. After every intervention she tried failed, she finally made the desperate decision to send Ben to Luke. To Ben, it must have felt like abandonment.

Away from Snoke’s influence and with people who really understood what he had, Ben improved for a time. He became close to his uncle and even closer to his young cousin after she was born. For Snoke, it was a significant setback, but not an irrecoverable one.

At some point, Snoke somehow learned Luke had a daughter. He could not get close to her as he had Ben, so he waited for the right opportunity to abduct her. When that opportunity came, Snoke’s thugs succeed in kidnapping Rey and bring her to Jakku to turn her over to the First Order. The attempt ends in disaster and Rey is presumed to be killed (something happens which leads to her accidentally blocking her own connection to the Force). This incident is devastating for everyone involved. Luke is emotionally devastated and never fully recovers while Ben is left with overwhelming anger and guilt. His family has refused to do what needs to be done and now the chaos gripping the galaxy has taken one of its own. Ben is further angry at Luke’s refusal to use all options to find his daughter and seemingly abandoning his own family, but the most intense anger is aimed at himself for not being strong enough to save Rey. He resolves to become strong enough that he will never fail to protect those he loves again (3).

With the loss of his daughter and the revelation of a new dark power, Luke dedicates himself to rebuilding the Jedi Order to confront this new threat. As the sole heir to the Skywalker legacy, Luke becomes determined to shape Ben into the Jedi he needs to be. In applying such pressure on Ben, Luke loses sight of how Ben actually is rather than how Luke wants him to be. In the face of the wide rift that has formed between him and his uncle, Ben secretly reaches out to Snoke after this incident for guidance. This result was completely unexpected to Snoke and he takes full advantage of it. He carefully works to further undermine Ben and Luke’s bond and starts to hint at Ben’s true lineage and encourages him to embrace his ancestor’s goals. 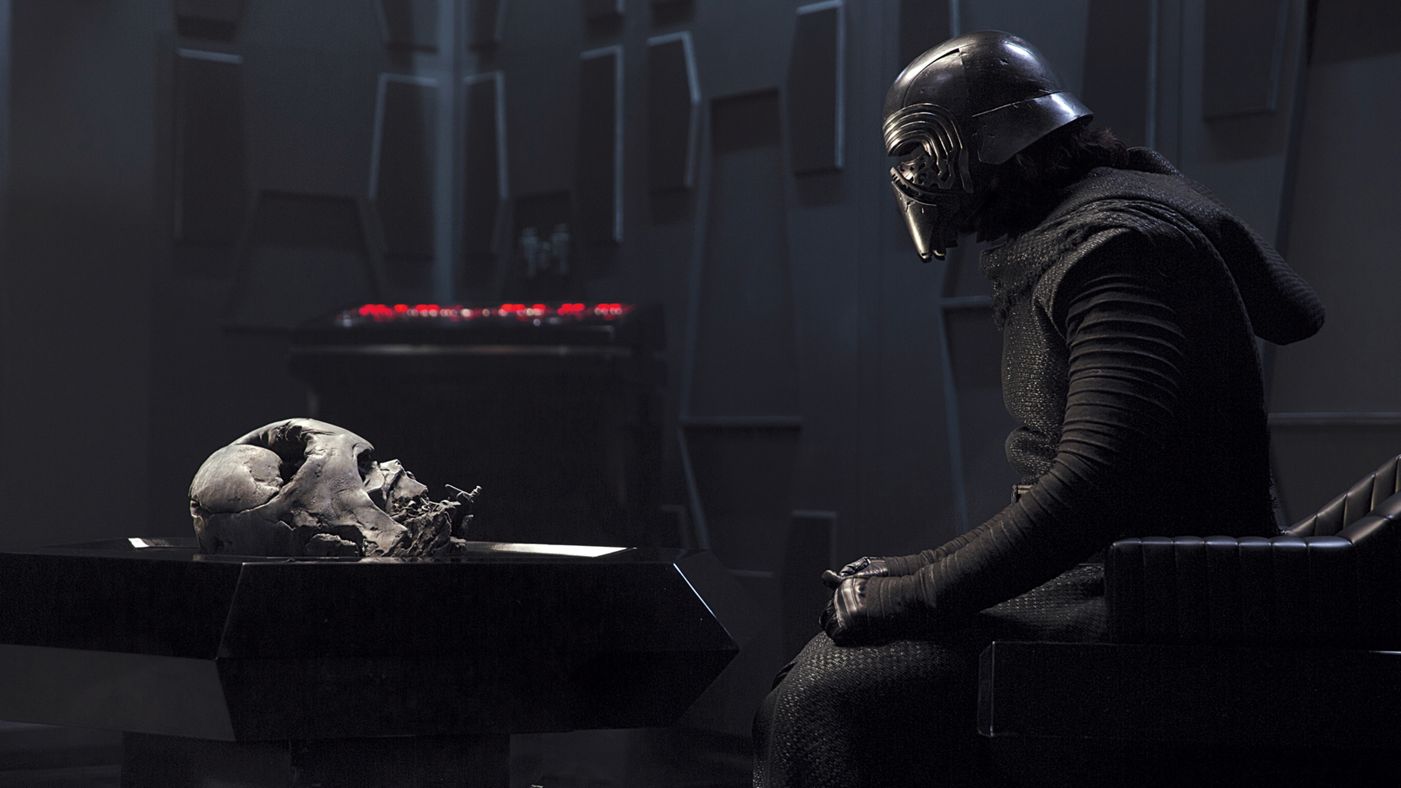 At some point, Luke learns of Snoke and moves to confront him. Around this time, Ben learns that what Snoke had been telling him is true; he is the grandson of Darth Vader. That his own family would keep this from him completely destroys his trust in them and cements his belief Snoke is his only true friend.

When Ben and Luke find and confront Snoke, Ben is shocked to find the person Luke wants to destroy is the only true mentor and friend Ben ever had. While Snoke tries to defend himself against Luke, the Jedi Master easily overpowers him and inflicts severe injuries. Snoke is beaten and Luke prepares to strike the final blow, but is stunned as Ben intervenes. Caught off guard, Luke is driven off and Ben leaves with Snoke. Fully believing that Luke and his nascent order are the true enemy, Ben doesn’t hesitate when Snoke tells him to destroy Luke’s order. Luke manages to escape his temporary imprisonment, but arrives too late to stop Ben and finds his students dead.

Luke is left in shock as a Jedi’s attempt to destroy the darkness forever has led to the fall of a Skywalker a second time. Realizing that seeking to destroy the darkness only led to it growing stronger, Luke resolves to study how the Jedi and Sith came to be and find a way to break the cycle (he obviously learned something on Ahch-To that broke him completely). Ben, in the meantime, assumes the identity of Kylo Ren and resolves to destroy all traces of Ben Solo and become what he needs to be return order to a broken galaxy.

Notes:
1: In Clone Wars, Sidious abducts several Force-Sensitive children to turn them into Sith spies. He further states he envisions a network of loyal acolytes who use the Force to peer into any corner of the galaxy. In Rebels, one of the functions of the Inquisitors is to find and forcibly recruit Force Sensitives. It’s possible Snoke was tasked with overseeing the creation and operation of this network.
2: There is a notable difference in how Leia views the Force in Life Debt and Bloodline. In the former, she’s interested and actively exploring her connection. By the latter, she seems to view her connection with suspicion and abandoned any attempts at developing her abilities.
3: In his moment of vulnerability on the bridge in TFA, Kylo states he wants to stop the pain. I think this may be one of the things he’s referring to.